Stalled out, or done?


16 replies to this topic

Here are the stats from an Amber Lager I started last week.   This is the brew I rinsed yeast from a previous brew (which was rinsed the same day I kegged the first brew).  I expected this to drop to at least 1.009

Should I call this done, or try something else?   I brought the temp when it started slowing down.  Maybe I shouldn't have?  dunno. 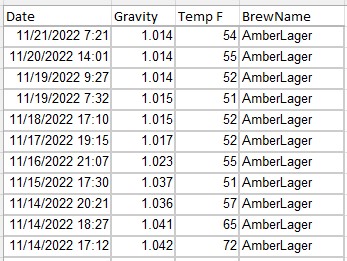 that temperature profile is the opposite of what I would recommend for a lager.  you should be starting in the low 50s and then at the very end either hold it in that general range or let it warm up to the 60s.

I pitched before the wort got low enough, i realize that.   The readings are a bit misleading.  My range on the temp controller has a 3 degree swing.  Normally when I looked at it (not from the tilt), it was reading 48.  I bumped it up to 53 on the 18th, then it stayed closer to 54/55.   The yeast I used suggested 48-55

I pitched before the wort got low enough, i realize that.   The readings are a bit misleading.  My range on the temp controller has a 3 degree swing.  Normally when I looked at it (not from the tilt), it was reading 48.  I bumped it up to 53 on the 18th, then it stayed closer to 54/55.   The yeast I used suggested 48-55

in any event I think you mistyped this sentence or I'm just not getting it.  Did you mean to say you brought the temp down?  Up?

I brought the temp when it started slowing down.  Maybe I shouldn't have?  dunno.

chart is descending by date.

Pitched too warm (at the bottom of the chart).   I had fermenter set to 48, but it took a little bit of time to get there.  I kept it at 48 till the 18th, then turned the temperature from 48 to 54.    My temp controller was set for a 3 degree swing.  So the exact reading fluctuated (I deleted several rows of data with different temps for ease of looking at the dates).

Long story short, do you think i should just leave it till convenient to keg or should i attempt something to kickstart fermentation again?

warming it up to be in the 60s won't hurt it and it might help.  if you don't mind the small electricity hit seems worth a shot.

It might be because of the rinsed yeast.  Rinsing is a bad idea.  It can weaken the yeast.

Basically, it has always been a bad move that has been difficult to kill because every newbie wants to gain some street cred by publishing an article on yeast rinsing. Do you want to know where the practice of rinsing yeast with boiled water originated within the amateur brewing community?  Charlie Papazian introduced it in the “New Complete Joy of Homebrewing” (it may even date back to an earlier publication of that book).  He also promoted the use of a secondary fermentation vessel as a way to prevent autolysis. While using a secondary fermentation vessel to prevent autolysis has gone the way of the do-do bird, amateur brewers still cling to yeast rinsing, a practice that is not based on science and provides no microbiological advantage.

Brewing yeast strains are Crabtree postiive. What that means is that whenever the medium gravity is above the Crabtree threshold of 0.2% w/v (an S.G. of 1.0008), brewing yeast cultures will chose fermentation over respiration even in the prescence of O2. There is scientific evidence that brewing cultures became Crabtree positive due to competitive pressure. You see, the main reason why we have cell counts in the first place is that they are primarily a safeguard against a micro-oganism other than the pitched yeast culture owning the wort. From the time a yeast culture is pitched until the culture grows large enough to reach high krausen, it is in competition for ownership of the wort with wild microflora (boiled wort is not absolutely sterile and sanitization is not a synonym for sterilization). A yeast culture owns a batch of wort by doing three things. First, it consumes all of the dissolved O2, shutting out aerobic microflora. It then lowers the pH to around 4, which shuts out pH sensitive microflora. The pH sensitive microflora include the pathogen Clostridium botulinum, which cannot replicate below a pH of 4.6.  The final defense that a yeast culture mounts is the production of ethanol, which is toxic to all living organism at a given level, even human beings (i.e., people die from alcohol poisoning every day).

When a brewer rinses yeast with boiled water, he/she removes the protective force field that a yeast culture built for itself, basically opening it up to infection from house microflora while providing zero microbiological advantage. A yeast culture does not need to be kept free from trub and hop particulate matter. It is needs to be kept as free from wild microflora as possible because every time a culture is pitched it is an opportunity for microflora other than the culture to replicate.  This reality is what places an upper limit on bottom-cropped yeast more so that any other other reason when a yeast culture is not serially overpitched.

Now, top-cropping an interesting take on cropping. While the top-cropped yeast should also be stored under green beer, top-cropping naturally purifies a yeast culture because wild microflora do not floc to the top, which means that top-cropped yeast can be re-pitched almost indefinitely as long as care is taken to not infect the culture.  The sad thing is that I have never heard of true top-cropping lager yeast.

If you need further evidence that yeast rinsing an amateur brewer fabrication that is not based on microbiology, watch how a craft or industrial brewery bottom crops yeast.  They either pump it out of the cone into a yeast brink for temporary storage or into a fermentation vessel with fresh wort.  I have yet to see a professional brewery rinse yeast with water before repitching it.

yeah, I skipped over the yeast rinsing but good points.  I don't know how much it would really hurt over a short period like this but it's certainly not recommended in any case.  I pitch it all in, baby!

Dang. I’ll keg it next week.

why wouldn't there be?

why wouldn't there be?

are you adding more sugar to carbonate?  if yes, it will carbonate.

Not necessarily to either.

I’ll do it this weekend. 4oz of sugar to the batch

Comptroller of Affairs with Potatoes

I think I had my first stuck fermentation in 20 years. I was brewing today, and while in the brew area, I noticed the fermenter from my brew two weeks ago was bubbling...every 6 seconds or so, more than I'd expect. I went out of town 2 days after brewing this but confirmed a few airlock chugs before I left.

I took a wine thief sample and it's only half fermented according to a refractometer conversion. I had some Lutra yeast I bought to check out so I pitched that. Beer was very sweet, but no off flavors at all. We'll see

The famed stuck fermentation happened to me, finally, but took a long time. Maybe a bad packet of S-05, perhaps.