26 replies to this topic

SAN PEDRO, LOS ANGELES -- An engineer deliberately ran a train off the tracks at high speed near the Port of Los Angeles in an attempt to crash into and damage the USNS Mercy hospital ship, prosecutors say.

The Pacific Harbor Line train derailed Tuesday, running through the end of the track and crashing through barriers, finally coming to rest about 250 yards from the docked naval ship.

Federal prosecutors allege train engineer Eduardo Moreno, 44, of San Pedro intended to hit the ship, saying he thought it was "suspicious" and did not believe "the ship is what they say it's for.'"

Authorities say Moreno admitted to crashing the train intentionally, but said he did not plan it out in advance. It is believed that he acted alone.

He allegedly made statements to a CHP officer that included "You only get this chance once. The whole world is watching. I had to. People don't know what's going on here. Now they will."

Sounds like Eduardo's cheese may have slid off of his cracker.

Comptroller of jokes about violence against women

Maybe the herd really does need a major thinning!

The truth is out there.

I had to double check the source before posting this because it was so surreal it had to be fake. Nope. ####ing loons.

Moreno has been charged with one count of train wrecking, according to the U.S. Attorney's Office. The charge carries a maximum penalty of 20 years in federal prison.

My favorite part of the story. There is a charge you don't see every day.

Three's a guy in my local neighborhood group that would get along well with this nut...

According to the article, this one did.

So ummmmm..... what was going on on the ship that we were supposed to find out about?

So ummmmm..... what was going on on the ship that we were supposed to find out about?


Chemicals for the trails.

Supposedly there's a deadly virus on board. Keep it quiet, tho.

It's where all the hoarded toilet paper is stashed

According to the article, this one did.


Not very well, though.

Chemicals for the trails.


Equipment for the fema internment camps

Area 51 got hit hard by the virus and they needed to move the aliens.

Well, he has a pretty good shot at an insanity defense.  I assume he's been in the cab long enough to know that there was no way he was going to hit the ship, unless he is stupid in addition to crazy.

Looking at it on Google maps, the track doesn't even point toward the berth where the ship is.  Not sure how he planned to steer it in to the ship. 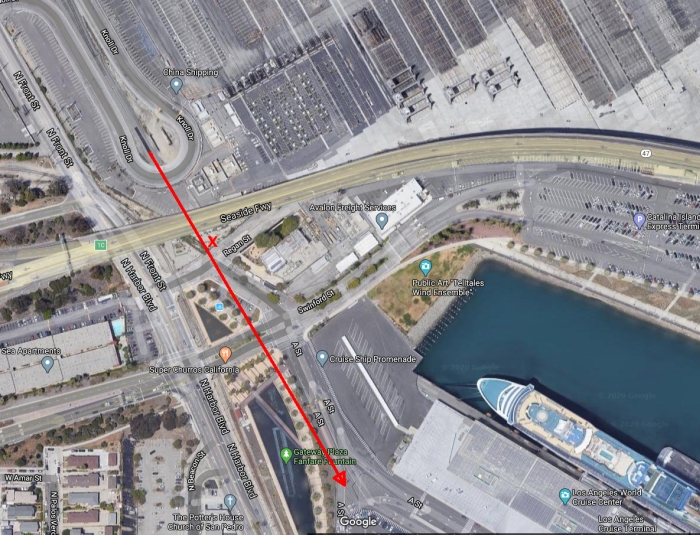 He wound up roughly at the X

A for effort. C for Crazy.